Susie was referred by our colleagues from Queens Park Veterinary Surgery (Bolton) to ChesterGates Veterinary Specialists for investigation of multiple progressive neurological signs. These included obtundation, behaviour changes, intermittent ataxia (wobbliness), compulsive pacing and hemi-neglect syndrome. The latter is unawareness to objects, and other stimuli on one side of the body. Susie’s owners reported that she was missing the food on the left hand side of the bowl and she was bumping into objects that were on her left hand side. Our neurology specialist Emili Alcoverro assessed Susie. A brain disease was suspected to be the most plausible reason of Susie’s symptoms.

Under general anaesthesia (GA), magnetic resonance imaging (MRI) was performed by our diagnostic imaging clinician Pablo Menéndez and revealed a large, space-occupying mass-like lesion on the right hand side of Susie’s forebrain. Given the MRI features, a brain tumour (likely a meningioma) was the main suspicion. 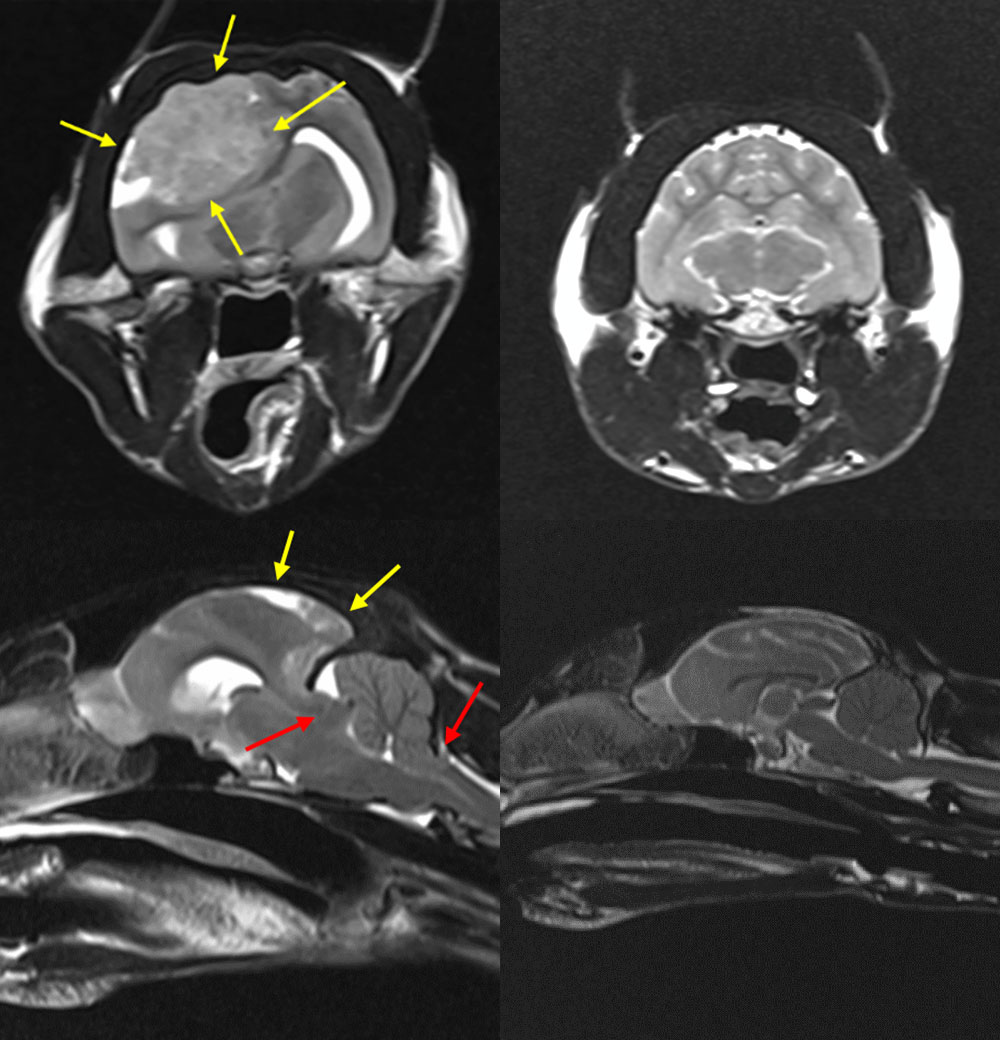 Susie’s tumour was large and was causing significant mass effect, leading to brain herniation and increased intracranial pressure (ICP). Increased ICP is a build-up of pressure inside the skull and around the brain. These signs were life-threatening to Susie. Therefore, medication to reduce the ICP and anti-inflammatories were administered whilst she was under GA. On the same day, after the MRI scan, Susie underwent emergency surgery to relieve the increased ICP and debulk the tumour.

Following the expert advice by Laurent Garosi (neuro-radiology consultant from VetOracle Teleneurology), a rostrotentorial craniectomy was performed on the right side of the skull. This procedure involved creating a window in the skull to directly visualise the brain tumour and underlying brain tissue. 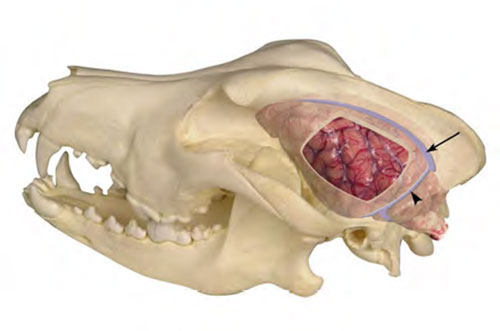 The surgery was performed by our neurology clinicians Emili Alcoverro and Simone Spinillo, assisted by our intern Rebecca Hood. With extremely careful manipulation of the tissue, most of the brain tumour was surgically removed. A titanium mesh was placed over the skull defect to protect the brain tissue underneath. The mass removed was sent off for laboratory analysis which confirmed a diagnosis of meningioma. In a study including 121 cats undergoing surgery for brain meningioma (like Susie), the median survival time was reported to range from two to four and a half years*.

In this study, there was a proportion of cats (16/121) that unfortunately died not long after the operation due to complications of this procedure. Here at ChesterGates, our anaesthesia clinicians and nursing team work closely with the surgeons to minimise these risks. Our anaesthetist Luis Louro, our intern Stephanie Lau and our nurse Nathalie Lawrence carried out very intense and close monitoring during Susie’s GA and surgery. All the procedure went smoothly and her recovery from the anaesthesia was uneventful.

Susie was hospitalised in our kennels for three days after the surgery. Our veterinary interns and patient care nurses intensively monitored Susie’s vital parameters, and made her comfortable and happy during her post-operative recovery. She showed marked improvement just 24 hours after the operation. She was bright, comfortable and no longer compulsive pacing. She was discharged with oral medication to control the risk of brain infection and swelling. Susie was seen back at ChesterGates 10 days after being discharged. Her owners reported Susie to be doing very well and basically back to her normal self!

Pet of the month – Dollar 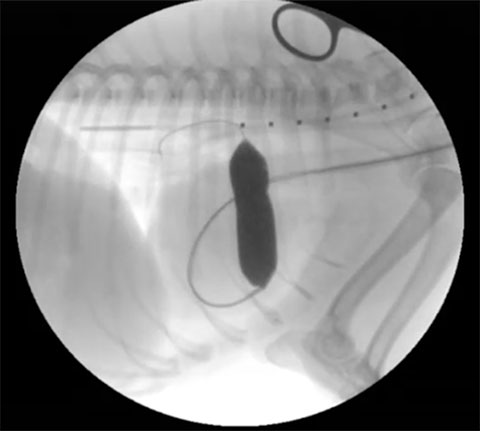 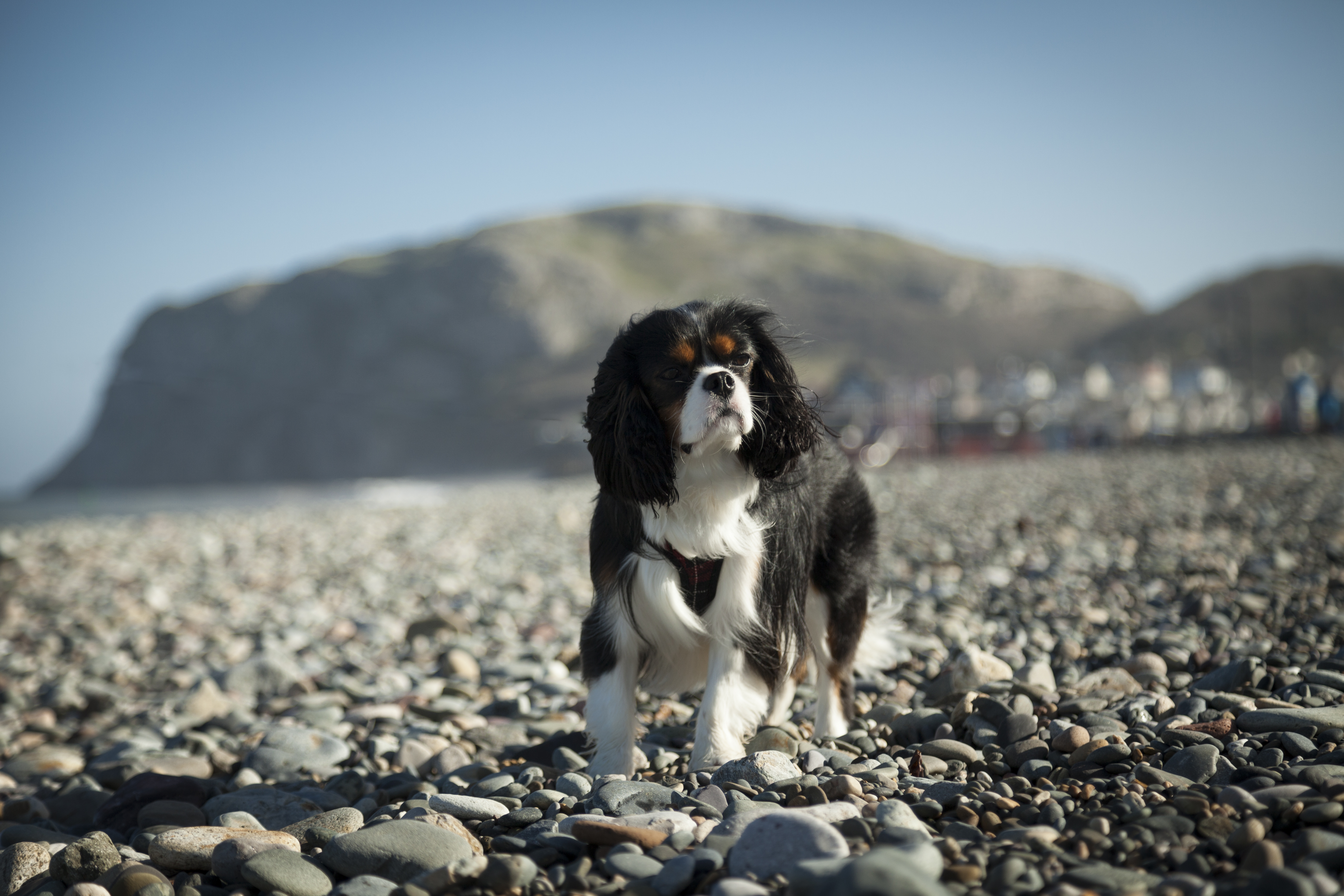 Pet of the Month – Ziggy

We're very sorry, our website forms aren't working at the moment and are working to get them back online, so if you need to make a referral or contact us please call us on 01244 853 823.