The most common reason for surgical management of ear disease is chronic otitis externa. Otitis externa is usually multi-factorial with a combination of primary, predisposing and perpetuating factors. Primary factors are factors that can directly cause otitis externa eg anatomical factors such as large, floppy, hairy ears as well as allergic skin disease. Predisposing factors, such as parasites, place the ear at risk of infection whereas perpetuating factors such as otitis media (middle ear infection), prevent resolution of the infection.

In cases with chronic and recurrent ear infections, permanent changes occur within the ear canal preventing topical ear medications from contacting the infectious agents as well as predisposing the ear canal to further infections. This becomes a viscous cycle leading to end stage ear disease that fails to respond to medical management. 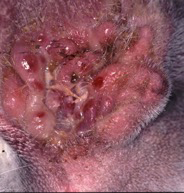 How do we investigate ear disease?

Investigation of otitis externa involves identification of any underlying causes of ear disease and assessment for the presence of otitis media. A full dermatological work-up and neurological examination may be required.

Both ear canals must be thoroughly examined with either a standard otoscope or ideally video-otoscopy. This should be done under sedation or general anaesthesia as this procedure can be painful. Changes to the tympanic membrane such as opacity, discoloration or rupture may indicate otitis media. A swab should be taken for cytology as well as bacterial/yeast culture and sensitivity testing. Computed Tomography (CT) of the skull will be taken to identify involvement of the bony structures around the ear and the presence of fluid within the bulla, consistent with an underlying otitis media. A normal bulla should be thin-walled and air filled (appears black on CT). 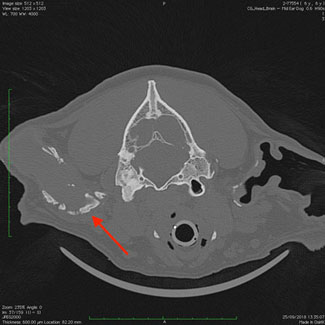 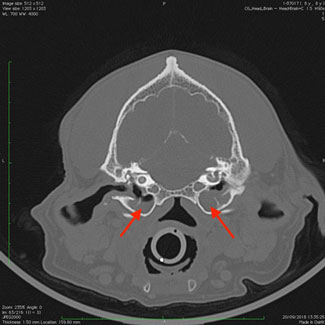 How do we treat ear disease?

Most cases respond well to medical management including ear cleaning and topical ear medications. Ear cleaning with saline should be done under general anesthesia. In cases where the tympanic membrane is intact but imaging shows evidence of otitis media, then a myringotomy is required. This involves making a small hole in the ventral aspect of the tympanic membrane to allow flushing of the middle ear.

When medical management fails to resolve the chronic ear disease or there is concurrent nerve damage, then surgery is indicated. There are four basic types of surgery that can be performed depending upon the regions of the ear that are affected: 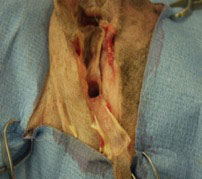 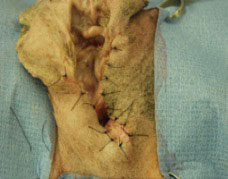 This procedure involves removal of the entire vertical (upper) ear canal, whilst maintaining the horizontal (lower) ear canal, and should only be performed in cases where the horizontal canal is normal. Like a lateral wall resection, this procedure is not curative therefore the underlying disease process will still require treatment. This procedure has some benefits over a lateral wall resection including less post-operative complications and a better cosmetic appearance.

This procedure has superseded the use of a lateral wall resection and vertical canal ablation and is the most common surgical procedure we perform on the ear. The reason is that most cases of otitis externa involve both the horizontal and vertical parts of the external ear canal, and irreversible changes are usually present by the time these cases present to us. This is usually combined with a lateral bulla osteotomy to allow the infectious material and lining of the tympanic bulla to be curetted out – if not recurrent abscessation is highly likely. 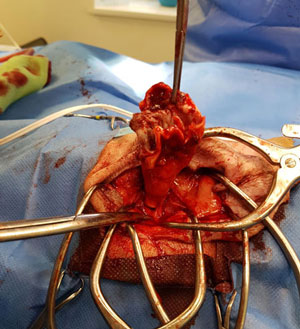 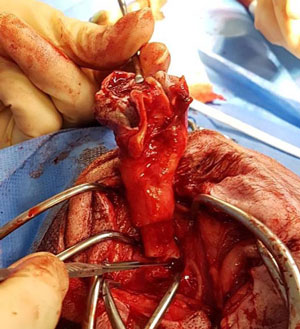 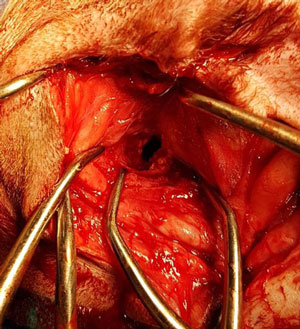 The bulla can be opened surgically either from the lateral or ventral approach. A lateral approach is more commonly performed as it is routinely combined with a TECA. Occasionally, only the middle ear is affected, and then a ventral approach is used. This is more common in cats due to the occurrence of inflammatory polyps within the middle ear. A ventral bulla osteotomy in a dog can be challenging as the bulla is not as prominent as in a cat. 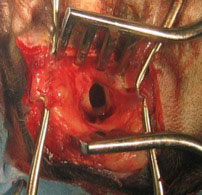 Opening into the bulla via a lateral approach.

What are the complications of ear surgery?

One of the common reasons for surgery to fail is failure to investigate/treat any underlying diseases or poor case selection. The complication rate of lateral wall resection and vertical canal ablation is high if any underlying disease process is not recognised and subsequently treated, or if concurrent otitis media is left untreated.

The cosmetic appearance following a total ear canal ablation on dogs with floppy ears is very good. Cats and dogs with erect ears may have some drooping of the ear flap, but generally the outcome is cosmetically acceptable.

Swelling at the surgical site is a frequent post-operative complication. Swelling immediately after surgery is often due to oozing of blood or accumulation of clear fluid (seroma). In some cases swelling can occur up to 1 year or more after surgery. In these cases swelling is usually a result of recurrent infection/abscessation due to an unresolved infection of the middle ear or ascending infection from via the auditory tube, and may require a second surgery.

Facial nerve paralysis is the most common neurological complication following total ear canal ablation. The facial nerve curves around the base of the ear canal. Severe and chronic ear infection can cause scar tissue to entrap this nerve making surgical dissection difficult. This nerve can be stretched or bruised at surgery resulting in the inability to close the eyelids, and drooping of the lips on the operated side. Eye drops may be required to prevent drying of the eye until the nerve damage has resolved. In most cases, facial nerve paralysis is a temporary problem and resolves within 2 months, but 5-10 % of cases have permanent damage.

Other less common complications of total ear canal ablation include Horner’s syndrome, vestibular disease and temporomandibular pain. Horner’s syndrome is caused by damage or inflammation of the sympathetic nerve that runs through the middle ear. Vestibular disease can occur if the damage extends to the inner ear. Less than 5-10% of patients develop this problem. Pain upon opening the mouth or difficulty chewing can occur if the joint of the jaw (temporomandibular joint), which is located just in front of the middle ear, gets inflamed from infection or surgery. This problem typically resolves within 2 weeks.

Welcome to our new team members