This case discussion revolves around a young Border Collie, diagnosed with hip dysplasia at the age of 8 months.

Hip dysplasia is one of the most diagnosed orthopaedic conditions in the dog. The aetiopathogenesis of hip dysplasia is complex, as it is a result of several genes and the environment. This has made efforts to reduce the prevalence of hip dysplasia through screening and breeding programmes very difficult. Efforts to manage cases have been more successful, with the prognosis generally considered good following appropriate treatment.

Bart first showed signs of pelvic limb lameness at 7 months old, which showed an improvement in response to rest. The lameness was worse on the right pelvic limb. Radiographs at the referring vets revealed bilateral changes with very poor acetabular coverage and remodelling and thickening of the femoral neck. To diagnose hip dysplasia orthogonal radiographic views of the pelvis are all that is required in most patients. Other techniques are usually only performed for screening programmes and to allow early preventative surgery in very young patients.

Bart was assessed by Prof John Innes, one of our orthopaedic specialists and conservative management was initiated including hydrotherapy, controlled exercise and analgesia using Librela. In young dogs, hip pain is often associated with the instability of the joint, and a substantial number of cases will show a significant improvement at 12-15 months old as stability improves. This approach is not considered for severe cases as pain, muscle atrophy and instability may progress, so early surgical management is considered. Re-examination of Bart and repeat LOAD scores initially showed an improvement but then plateaued with an unacceptable level of function at 16 months of age.

There are several surgical treatment options available for symptomatic hip dysplasia cases and it is indicated when conservative management has failed. Palliative surgery includes hip denervation; however, this is rarely performed. Salvage procedures include FHNE (Femoral Head and Neck Excision) and THR (Total Hip Replacement). In Bart’s case, a THR was discussed and performed on the right hip. THR is considered the gold standard salvage procedure for the hip in dogs and cats, as it is in humans, and is more predictable than FHNE. THR has the ability to restore the normal kinetic function of the hip and limb. During surgery, Bart’s acetabulum and femoral head were replaced with Biomedtrix prosthetic components, which were attached to the bone using cement. THR are complex and require two surgeons. No issues were encountered during Bart’s surgery and post-operative radiographs revealed good implant positioning (see image). He recovered uneventfully and was discharged home with instructions for strict rest, and then a slow reintroduction to exercise over the next 6 weeks. 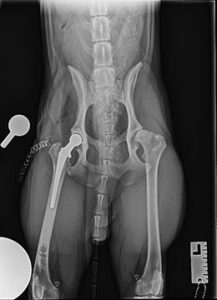 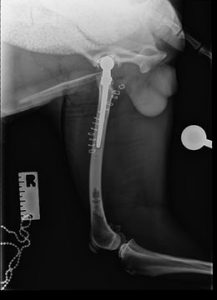 In the hands of an experienced surgeon, outcomes of THR are very good with rapid recovery rates and excellent long-term function. Complication rates can be as low as 5%, with the main complications including hip luxation, infection, implant failure, femoral fracture and sciatic neuropraxia. These complications are often managed successfully, however further surgery may be needed in some cases. The avoidance of complications is strongly associated with surgeon experience and so referral is strongly advised in all cases where THR is being considered. 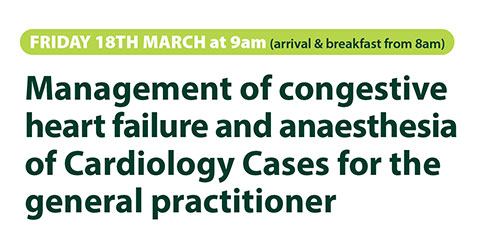 What to assess when selecting potential candidates for radioiodine treatment