What is lung lobe torsion?

Lung lobe torsion is an uncommon condition where the lung lobe twists on its pedicle. Large, deep chested dogs (esp. sighthounds) appear predisposed. In these dogs the torsion usually occurs in the right middle lung lobe. Lung lobe torsions have also been reported in small breeds esp. Pugs, where the left cranial lobe is mainly affected. Most affected animals are 4-5 years of age and males are predisposed. Lung lobe torsion can be spontaneous or as a result of chylothorax, trauma, neoplasia, chronic respiratory disease or previous thoracic surgery. It is speculated that partial collapse of a lung lobe leads to an increased mobility.

Most torsions result in obstruction of the venous/lymphatic supply and bronchus. The arterial supply is often preserved. This results in severe congestion and consolidation of the affected lung lobe. Pleural effusion or pneumothorax can occur.

How do these cases present?

The clinical signs can often be vague. Dogs with lung lobe torsion can present either acutely of chronically. Common signs include dyspnoea, lethargy and coughing. A pleural effusion or pneumothorax can result in reduced cardiopulmonary sounds.

How do we diagnosis lung lobe torsion in dogs?

A full haematology and biochemistry should be performed. Haematological abnormalities seen include neutrophilic leucocytosis and anaemia. Biochemistry abnormalities include elevated liver and renal parameters as well as reduced albumin.

Imaging is essential. Two orthogonal (lateral and dorsoventral) thoracic radiographs should be taken. Radiographic findings include consolidation and emphysema of the affected lung lobe, pleural effusion and pneumothorax. In addition, due to the enlarged lung lobe, displacement of the trachea or bronchus may be evident. A mediastinal shift may also be present. The differential diagnoses of a consolidated lung lobe include infection (pneumonia), foreign bodies, pulmonary oedema/haemorrhage, atelectasis and neoplasia. 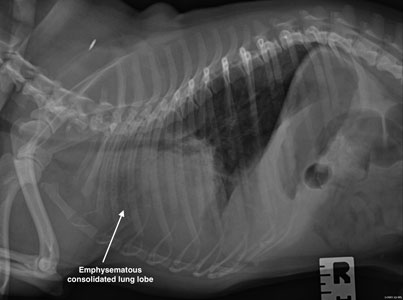 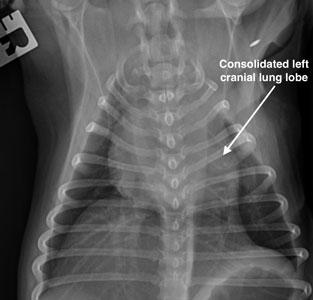 Radiographs of a four year old MN Pug with lung lobe torsion of the left cranial lobe. Note the classic radiographic sign of emphysema within the torsed lung lobe

Thoracic ultrasonography can also be performed. Findings may include a soft tissue density with gas bubbles of the affected lung. In addition, a pleural effusion may be seen. Thoracic CT is more sensitive and my imaging modality of choice for investigating the thoracic cavity. The bronchi may appear narrowed or even occluded at the site of the torsion – this abrupt narrow can be quite obvious. Vesicular emphysema may be seen. The torsed lung lobe has no significant contrast enhancement. 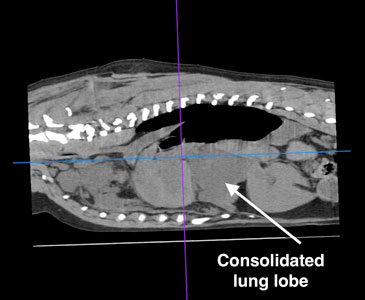 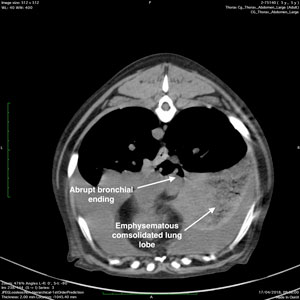 How do we treat lung lobe torsion in dogs?

Initial management is aimed at stabilisation. Thoracocentesis may be required to remove any pleural effusion or pneumothorax.

How to perform a thoracocentesis? The drainage site will depend on whether you are draining fluid or air. For a pleural effusion, place the patient in sternal recumbency. Ideally the ventral third of the 4-7th intercostal space should be used. In cases of pneumothorax, with the patient in sternal recumbency, insert the needle in the dorsal third of the 4-7th intercostal space. If the patient is in lateral recumbency then air can be drained by inserting the needle in the mid-thoracic region of the 4-7th intercostal space. Thoracocentesis should be performed aseptically with ideally a butterfly catheter/hypodermic needle, extension tube, three way stop cock and syringe. The procedure can be performed under local or general anaesthesia. To avoid lacerating the lung, insert the needle so it is 45 degrees to the thoracic wall (the bevel will be parallel to the body wall).

Oxygen therapy may be required. Oxygen can be provided in many ways such as:

The treatment of choice for lung lobe torsion is a total lung lobectomy. This should be performed by a 5th intercostal thoracotomy on the affected side. Rarely, if the exact location of the lung torsion cannot be identified prior to surgery, then a median sternotomy is required. The torsed lung is usually enlarged, congested and very friable. Do not untwist the torsed lung lobe as this will result in the release of inflammatory mediators and endotoxins into the blood stream. The twisted pedicle can be either ligated or ideally stapled, and the lung lobe removed.

Top tips on how to perform an intercostal thoracotomy

Whilst a thoracotomy is an invasive procedure it appears to be well tolerated. If you are unsure of the exact intercostal space to enter then the site chosen should be more caudal as rib retraction results in better exposure cranially. Finochetto rib retractors are essential to facilitate exposure. Surgical stapling devices simplify and improve the efficiency of the surgery. A thoracostomy tube is usually placed just prior to closure of the thoracic wall. The thoracic wall is apposed using 4-6 interrupted circumcostal sutures of large gauge polydioxanone. It is helpful to have an assistant place traction on one or two of the sutures to remove tension when you tie the sutures. Gallibans can also help maintain the tension of the surgical knot during tying. The remainder of the thoracic wall is closed routinely.

The prognosis has previously been reported as fair to guarded with a survival rate of 50%, with a more favourable prognosis in Pugs. However anecdotally the survival rate appears significantly higher and this has been confirmed by a recent report that reported a 92% survival to discharge.1

What to assess when selecting potential candidates for radioiodine treatment

We're very sorry, our website forms aren't working at the moment and are working to get them back online, so if you need to make a referral or contact us please call us on 01244 853 823.